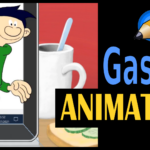 As a young boy I was addicted to comics that had detailed and well drawn pictures, Gaston (the comic) is no exception. André Franquin is the creator of Gaston his comic books/strips had a sepcial kind of humor that I liked as well as his drawing. When I saw an old Pencil2D screenshot with André’s character Gaston in it I thought it would be a fun task to try to make a short animation of it. So here it is. I apologize that I did not draw Gaston as good as André would have done it but since my animation is a one man show I just could not go back and re-do his face in all those frames that i dislike so it is what it is. I have learned many lessons during the project, a big mistake I made was I initially planned to have 24 fps and animate in 2’s but when I was almost finnished I had overlooked that I had set P2D to 12 fps.😮 So I had to change it to 24 fps so just there I doubled my work. 😁 At that time I thought, no I will never finnish this but I did so here it is.

Drawing is a hobby I have and I find it interesting to draw both the traditional way or with software on a computer and learn new things on the way.
View all posts by cartoonspace →
This entry was posted in News. Bookmark the permalink.
Click here to cancel reply.